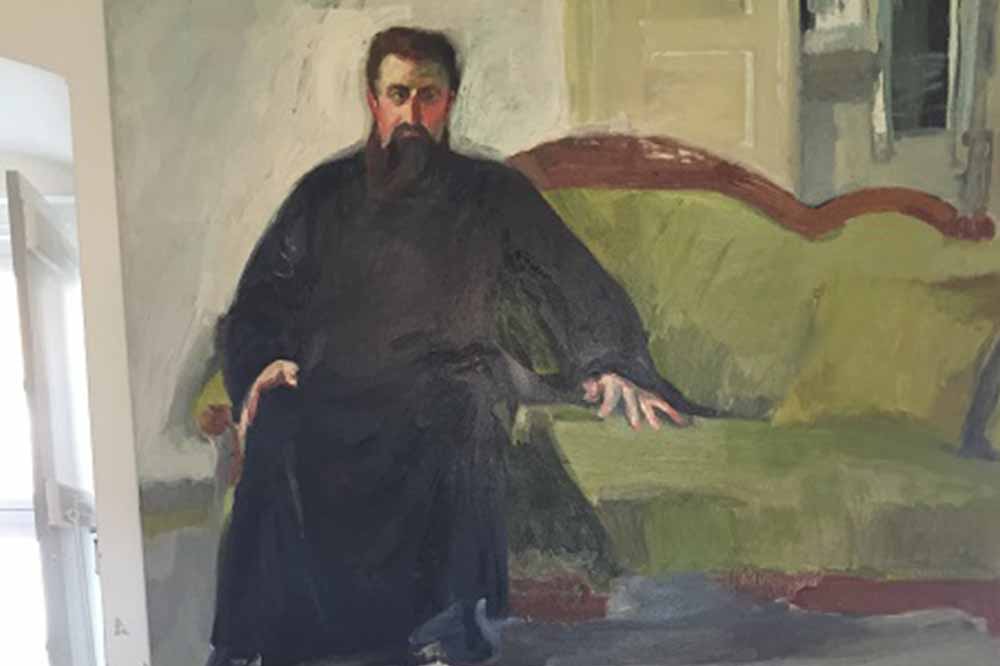 I remember seeing Tetsis, as he was commonly known, some years ago walking his little dog. He looked so ordinary. How do you recognise a great artist from appearances? Here was a kindly looking man in his eighties, tall and plodding. A man who would go unnoticed except for his height, long limbs and disproportionately small dog.

His house, high above the port in the Saronic island of Hydra, is perhaps like him. Extraordinary in its ordinariness. His studio, a cool white space on the first floor, has been left as it was when he died. It contains very little – a few large canvases on the wall, a formal sofa which would look at home in a 19th century lady’s boudoir and a smallish table cluttered with an artist’s detritus.

The rest of the house is also simple, under-furnished and unfussy. Few of its contents look like they were bought after about 1950. Some old photographs, some traditionally embroidered pieces of table linen and less than half a dozen of his paintings are personal pieces among few non-essential items of daily living.

His aunts’ shop is part of the house and adjoins one of the only two sparsely furnished bedrooms. The shop closed long ago, but remains intact in its charming old-fashioned style and walls lined with wooden display cabinets and shelves. The museum man remembers shopping there as a child.

The spirit of Tetsis seems to live on in this peaceful, simple and cool place. I’m familiar with his paintings. But to accept his open invitation and quietly wander through his home gave me an idea what the important things in life were to Tetsis.

The lady in The Lazaros Koundouriotis, the museum to which Tetsis bequeathed his house, spoke of how ‘human’ and down to earth he was. The young men in the other art museum – the Historical Archives Museum of Hydra – said he would tell them off if they treated him as a “great artist”. “I am just your friend,” he’d say.

Tetsis’ work is impressive. I always imagine artists such as him to be so unlike ordinary people. That they can create pieces that defy the imagination and that they touch others so deeply through their work. I wonder what kind of person is able to do that.

Thank you Tetsis for letting us into your house and thereby revealing to us a little more of the man you were.

Sally BibbDirector, Engaging Minds
Sally Bibb is the author of Strengths-based Recruitment and Development: A Practical Guide to Transforming Talent Management Strategy for Business Results and The Strengths Book: Discover How to Be Fulfilled in Your Work and in Life, and is a leading strengths expert.
May 2nd, 2017|extraordinary people, making a difference, using your own strengths|